Following the Collect, the priest (who should already be at the epistle side of the altar) announces and begins to read the epistle. (Which should technically be called the “Lection” or “Lesson,” since, after all, it isn’t always one of the Epistles). Afterward, he moves to the center of the altar, prays a few preparatory prayers while the Gradual and Alleluia are chanted (at a High Mass; at a Low Mass, he would have already spoken them aloud before moving to the center), and then proceeds to the Gospel side of the altar to pray the Gospel; at a Solemn High Mass, the deacon will proceed to the left of the altar altogether, sometimes to a separate altar, and proclaim the Gospel facing to the left, as pictured below. 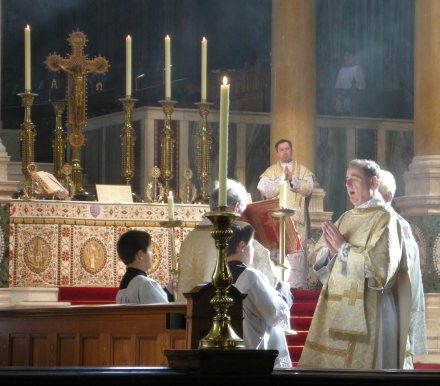 It’s opportune to reflect here on the idea of “epistle” and “Gospel” sides of the altar. If you’re sitting in the pews and looking at the altar, the priest moves to the right-hand side to read the epistle: that’s the epistle side. He moves to the left-hand side to read the Gospel: that’s the Gospel side. Here, as always, there is symbolic significance: the altar symbolically (and often literally) faces east, toward Jerusalem, the direction from which Christ will return. If facing the altar is east, then moving to the right-hand side of the altar is moving south, which is to say, in the direction of those already converted, for whose benefit the epistles were written, and for whose instruction they are proclaimed. Recall here that, during the apostasy in Israel, it was Judaea, the southern half of the kingdom, where faithfulness to the Lord was alone preserved. Moving to the left-hand side of the altar, then, is moving north, which is to say, in the direction of those not yet converted: toward Galilee, the gateway to the gentile world, where the Gospel yet needs to be proclaimed. Note, too, that while the altar stand faces straight for the epistle, it is angled 45 degrees away from the altar for the Gospel, an explicitly outward-moving and evangelical gesture. (All of this is the customary interpretation, anyway, which may be specious: the epistle/Gospel side distinction is definitely not pre-Tridentine).

It’s not generally well known that the two forms of the Mass have an entirely different lectionary (that is to say, appointed Scriptural readings). As far as I know, there are virtually no occasions in which you would hear the same readings at a traditional Latin Mass as you would at the ordinary form Mass on the same day. Let’s compare the two lectionaries briefly:

Most people take for granted that the reformed lectionary is better, because it includes more Scripture. That’s certainly a positive, but we mustn’t imagine there aren’t drawbacks to it, as well, or that the traditional lectionary has nothing to offer. Consider:

There is an additional problem with the reformed lectionary, which I will have to handle in a separate post: namely, what it leaves out, compared to what the old lectionary included.

One thought on “A brief walkthrough of the Mass: Lections, Responses, and Gospel”

The blog of the Latin Mass Society of Bloomington, IN, dedicated to bringing regular celebration of the traditional Latin Mass (also called the "Extraordinary Form" of the Mass, or the Tridentine Mass) to Bloomington, IN.